The War of the Workplace 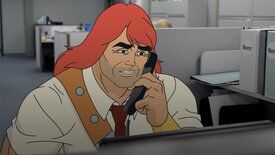 The War of the Workplace
After watching someone from the office across the hall take hot sauce from the Sanitation Solutions break room, Zorn tries to rally the rest of his co-workers to wage war on them - Zephyrian style. Meanwhile, Alan tries to get Edie to give him a note for gym class as it's swim unit next week and he's afraid to expose his legs.

Previous Episode /// The War of the Workplace \\\ Next Episode

Community content is available under CC-BY-SA unless otherwise noted.
Advertisement